p-nitrophenol has the most stable stereochemistry among o, m and p isomers of nitrophenol. Since the nitro group employs negative resonance (or mesomeric) effect there is decrease in the electron density at ortho and para positions.

The phenoxide ion after donating the proton can also show positive resonance (+R) effect and increasing the stability of the ion. This results into increase in the tendency to donate that proton.

The hydrogen bonding strongly reduces the tendency to donate that proton and in turn decreases the acidity of o-nitrophenol. 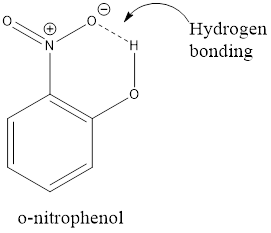 In ethers due to presence of bulky alkyl groups (-R groups) on both sides the repulsion of lone pairs is interfered by molecular repulsion which in turn decreases the effect of lone pair repulsion and thus the bond angle is slightly higher for ethers.

(c) (CH3)3C ─ Br on reaction with NaOCH3 gives an alkene instead of an ether.

Formation of ether undergoes bimolecular nucleophilic substitution reaction. It implies simultaneous breaking and formation of bonds. Now this step involves the approach of alkaoxide as a nucleophile which experiences stearic hindrance from methyl groups in the compound. Also tert-butyl carbocation can be easily formed if the C ─ Br bond breakes easily.

The alkaoxide used in the reaction are strong bases which can easily break the C ─ Br bond to give the carbocation which then undergoes elimination reaction to give alkene.

Ethers can be pre

Explain why is O=