Give one example each of uniform and non uniform in our daily life.

Uniform motion: When a car moving at a constant velocity of 50Km/hr in a straight line, then the car is covering equal distances in equal intervals of time irrespective of the length of time. Then we can say that the car is in uniform motion.

Non Uniform motion: When a race car constantly accelerates to win the race, then the car travels unequal distances in equal intervals of time. Hence such an instance can be referred as an example of non-uniform motion.

How useful is this solution?We strive to provide quality solutions. Please rate us to serve you better.
PREVIOUSDerive first equation of motion by graphical method.NEXTAn ant climbs up five stairs, each of width 20 cm and height 20 cm. Find the distance covered and displacement of ant.
Related Videos

Learn The Use of Equations of Motion37 mins

Learn the Physics of Motion under gravity!56 mins

Does the motion of second’s hand of a watch represent uniform velocity or uniform speed?

Plot the v-t graph for the following data and state the nature of motion the body:

Give one example each of uniform and non uniform in our daily life.

Instruction: The table given below shows distance (in cm) travelled by the bodies A, B and C. Read this data carefully and answer the questions which follow. 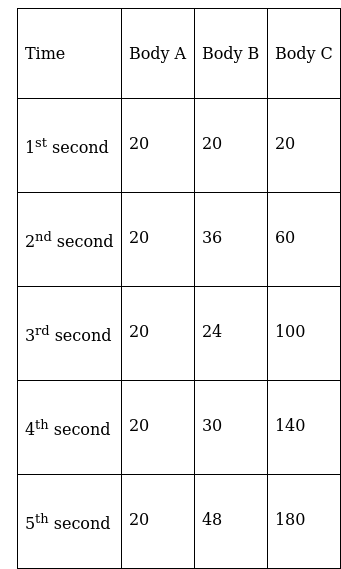 1. Which of the bodies is moving with

2. Which of the bodies covers

(a) maximum distance in 3rd second?

(b) minimum distance in 3rd second?

3. Which of the bodies is moving with non-uniform acceleration?

The velocity-time graph (Fig. 8.5) shows the motion of a cyclist. Find

(ii) its velocity and

(iii) the distance covered by the cyclist in 15 seconds. 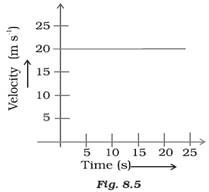 Acceleration is defined as the rate of change of velocity.

A motion is said to be uniform, if x

A motion is said to be uniform, if a body undergoes equal displacements in equal intervals of time.

The motion in animals is called locomotion. Mechanics deals with the motion of non-living objects.

A body is said to be at rest, if it does not change its position with respect to the reference point.