Give an account of the experiment performed Miller and Urey in 1953.


Class 10thAll In One Science9. Heredity and Evolution

Miller & Urey has performed an experiment to proof chemical origin of life. They postulated that first organic cell would have been produced from inorganic (chemicals) substances.

They took a glass jar and tried to create an internal environmnet same as that of earth's environment billions of trillions year ago.

In a sterile jar they insert methane(CH4), hydrogen(H2), water (H2O) & ammonia(NH3). They heat the jar to increase its temperature to match up the earth's temperature million years back & also increases the pressure. They even provided some electric current to that jar. After some days, the solution starts turnng pink because of the formation of some organic compounds.

This experiment gave some evidences of formation of life from some inroganic/chemical sources. 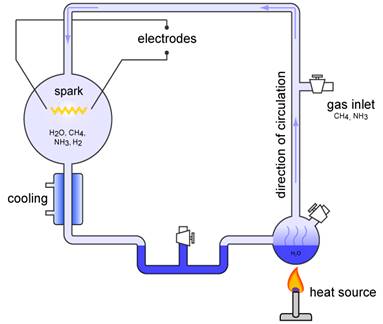 How useful is this solution?We strive to provide quality solutions. Please rate us to serve you better.
PREVIOUSExplain how the variations get accumulated.NEXTIs it true that evolutionary relationship is linked to classification? Explain with an example.
Related Videos

Give one term caption for the two pictures given here.

Define the term and give its signifance in evolution.

Explain the development/origin of the theory of the chemical origin of life.

Which statement describes an example of artificial selection?

Give an account of the experiment performed Miller and Urey in 1953.

All In One Science 877 views
Q