Write equations of the following reactions:

The driving force of all the reactions given to the question is that the alkoxy group is an ortho and para directing group because it exerts its +R effect in the benzene ring. Para position being comparatively more stable than the ortho position is usually preferred because ortho position leads to stearic hindrance, hence the major product is mostly the para-substituted compound. 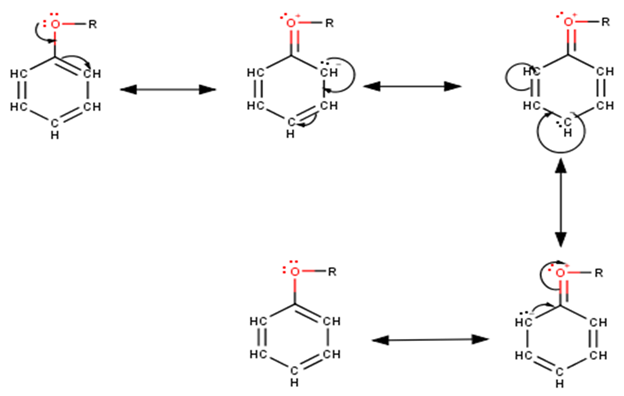 As seen from the resonating structures above the structure in which the negative charge is in the para position will form a more stable product when attacked by an electrophile. Hence in the following reactions, we will be considering that resonating structure as the starting material.

The Friedel-Crafts alkylation of anisole gives p-methylanisole as the major product.

The mechanism is given below: How useful is this solution?We strive to provide quality solutions. Please rate us to serve you better.
PREVIOUSWrite the mechanism of the reaction of HI with methoxymethane.NEXTWrite equations of the following reactions:Nitration of anisole.
Related Videos

Test yourself on Alcohol, Phenol and Ethers43 mins

A statement of assertion followed by a statement of reason is given. Choose the correct answer out of the option given below each equation.

Assertion : Bond angle in ethers is slightly less than the tetrahedral angle.

Reason : There is repulsion between the two bulky (—R) groups.

Ethers can be prepared by Williamson synthesis in which an alkyl halide is reacted with sodium alkoxide. Explain why di-tert-butyl ether can’t be prepared by this method.

Match the starting materials given in Column I with the products formed by these (Column II) in the reaction with HI. Assertion : Boiling points of alcohols and ethers are high.

Reason : They can form intermolecular hydrogen-bonding.

Write equations of the following reactions:

For all real values of x, the minimum value of

Explain why Cu+ ion is not stable in aqueous solutions?