The potential difference Va – Vbcan be found out using Kirchoff’s loop rule. Kirchoffs loop rule states that, in any closed loops, the algebraic sum of voltage is equal to zero.

To solve a problem, follow some simple procedure as explained below with an example figure. 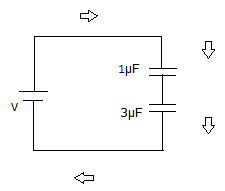 The two capacitors 1 μF and 3 μF are connected in series with the battery of V voltage.

We consider the loop and travel through it in any direction, clockwise or anti-clockwise. In the figure we choose to go in clockwise direction as shown.

Note: In the case of a DC source inside the loop, a change from –ve to +ve will be assigned as a positive potential.

Assume the total charge in the loop is q. So, as per kirchoff’s loop rule, the sum of voltages will be,

From this equation, we can find the unknown values depending on the problem.

This same principles are extended to the following problems. 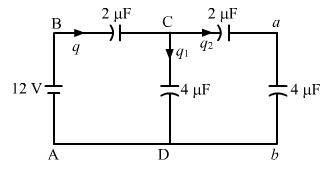 In the figure there are three loops: ABCabDA, ABCDA,CabDC. We goes in clockwise direction in every loops.

And assume, total charge, q is splitted into q1 and q2, since they branches in parallel.

Applying kirchoff’s rule in CabDC, we get

So the above expression becomes,

Substituting eqn.1 in eqn.2, we get

b) Let’s assume there a charge of q amount is in the one loop involved. 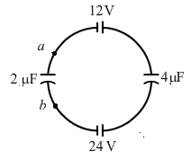 By applying Kirchoff’s loop rule, by going in clockwise direction, starting from the point a, the sum of potential difference is,

Now, we have to find the potential difference across 2

μF capacitor. Since we considering Clockwise as positive direction, 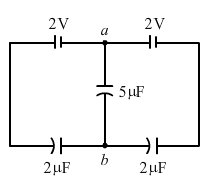 From the figure, we can see that, the either side of the terminal a-b are similar or the loops are symmetrical with respect to the terminal a-b. The charge in either of the loop will be same, which can be assumed as q.

Which means, between the terminals a-b,

Hence the Potential difference across 5μF,

The three branches are connected in parallel across the terminal a-b.

The potential difference Va – Vbcan be found out by,

Where the net charge and net capacitance are the algebraic sum of charges and capacitance ein each branches. So, 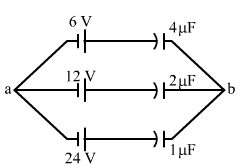 In the upper branch, Capacitance is 4μF, and Charge, Q is,

Charge on the capacitor,

V is the potential difference across the end of the capacitor.

In the upper branch, Capacitance is 2μF, and Charge,Q is,

In the bottom branch, Capacitance is 1μF, and Charge, Q is,

Hence Net charge between a-b, by adding all the charges,

In the circuit sh

In the circuit sh

A finite ladder i