Find the equivalent resistances of the networks shown in figure between the points a and b. 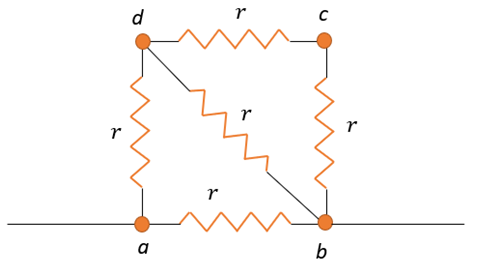 The resistors across dc and cb are in series. 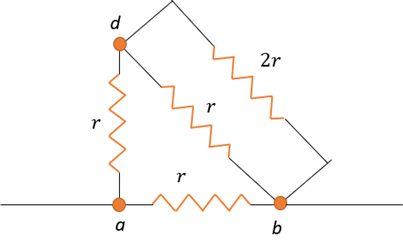 Now, the two resistors across db are in parallel. 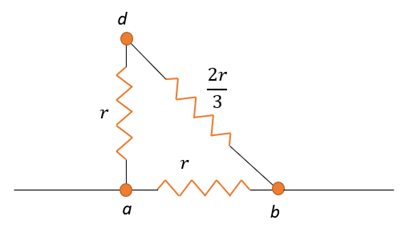 The resistor across db and ad are in series.

The circuit can be redrawn as follows: 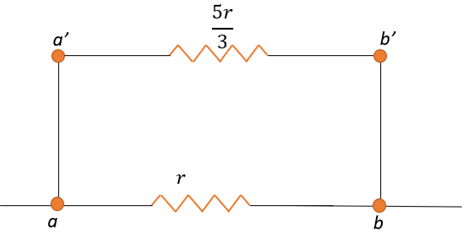 The resistances a’b’ and ab are in parallel.

The point b is connecting the ends of three resistors; the other ends of the resistors are attached to a fourth one with one of its end being point a.

Hence, we can redraw the circuit as follows:

We can see that the resistors across bc are in parallel.

We can redraw the circuit as follows:

Note that the resistors across bc and ca are in series.

(c) We can redraw the given circuit as follows: 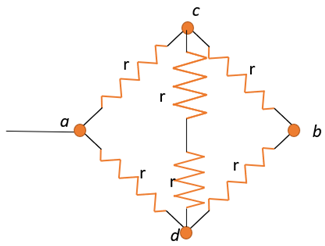 Note that there is symmetry in the circuit; the upper and the lower parts are identical. Hence, the potential at d should be the same as potential at c. Consequently, there is no potential difference across dc. We can neglect the resistors across dc. 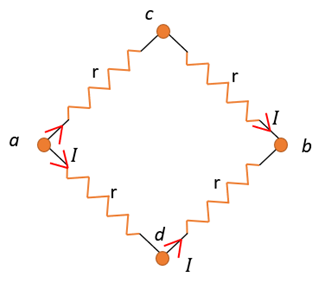 We can redraw this circuit as follows:

We can easily see that uc and cv are in series.

Now, resistors across uv and nm are in parallel.

The circuit can be drawn as follows: 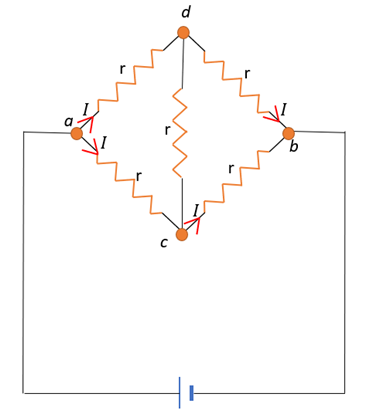 As we wish to find the resistance between points a and b, we have proceeded to add a voltage source of emf ϵ between the points a and b.

Let the net current coming out of the battery be 2I. We can see that the circuit is symmetric i.e. its upper and lower portion are the identical. Thus, the current should divide equally when branching out. So, current through ac and ad is I.

Hence, we can rewrite the circuit without the resistor across dc. 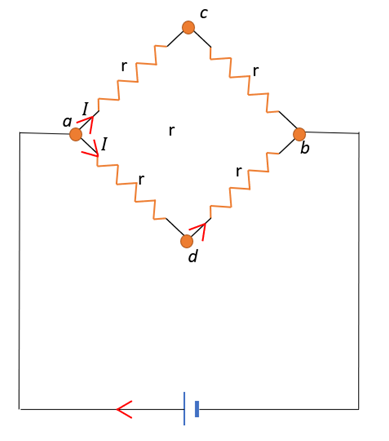 The circuit can be redrawn as: 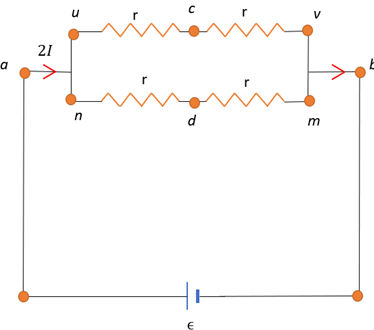 We can see that uc and cv are in series.

Also, nd and dm are is series.

Hence, we can rewrite the circuit as follows: 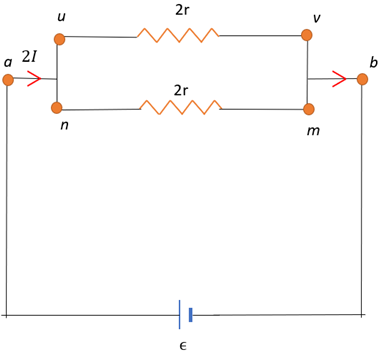 Now, uv and nm are in parallel.

How useful is this solution?We strive to provide quality solutions. Please rate us to serve you better.
PREVIOUSTwelve wires, each having equal resistance r, are joined to form a cube as shown in figure. Find the equivalent resistance between the diagonally opposite points a and f.Concept/Formula used:Kirchhoff’s junction rule:The sum of currents entering a junction is equal to the sum of currents leaving it.Kirchhoff’s loop rule:The sum of potential differences around a closed loop is zero.NEXTAn infinite ladder is constructed with 1Ω and 2Ω resistors as shown in figure.(a) Find the effective resistance between the points A and B.(b) Find the current that passes through the 2Ω resistor nearest to the battery.
Related Videos 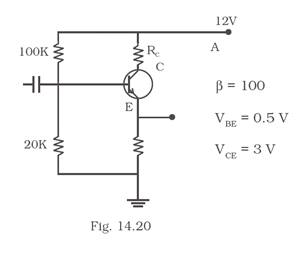 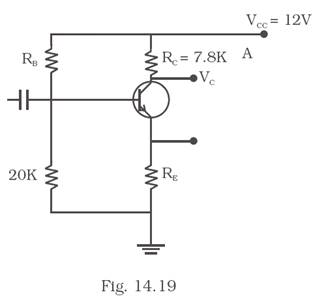 Assuming the ideal diode, draw the output waveform for the circuit given in Fig. 14.17. Explain the waveform.

Consider the circuit arrangement shown in Fig 14.16 (a) for studying input and output characteristics of n-p-n transistor in CE configuration. 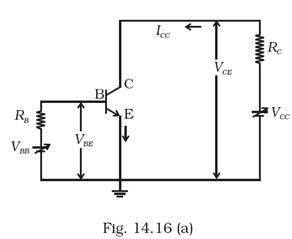 Select the values of RB and RC for a transistor whose VBE = 0.7 V, so that the transistor is operating at point Q as shown in the characteristics shown in Fig. 14.16 (b). 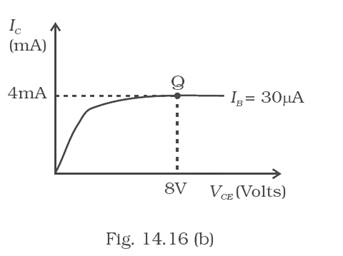 Given that the input impedance of the transistor is very small and VCC = VBB = 16 V, also find the voltage gain and power gain of circuit making appropriate assumptions.

Two cells of emf E1 and E2 have internal resistance r1 and r2. Deduce an expression for equivalent emf of their parallel combination.

In the circuit shown in Fig.14.14, when the input voltage of the base resistance is 10V, Vbe is zero and Vce is also zero. Find the values of Ib, Ic and β. 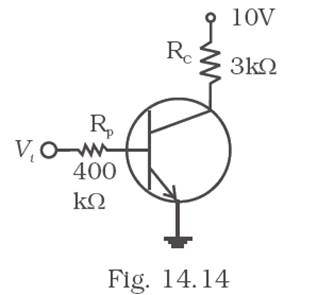 If each diode in Fig. 14.13 has a forward bias resistance of 25 �Ω and infinite resistance in reverse bias, what will be the values of the current I1, I2, I3 and I4? 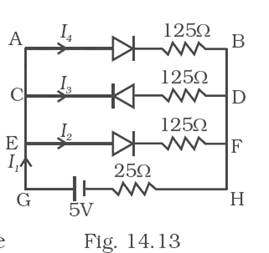 Kirchhoff ’s junction rule is a reflection of