Find the charges on the four capacitors of capacitances 1 μF, 2 μF, 3 μF and 4 μF shown in figure. 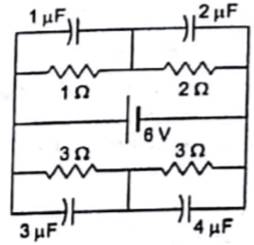 The sum of potential differences around a closed loop is zero.

If two conductors have a potential difference V between the them and have charges Q and -Q respectively on them, then their capacitance is defined as 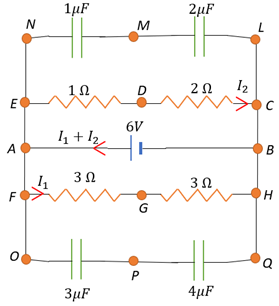 As the 3Ω resistor and the 3μF capacitor are in parallel,

A capacitor is made of two circular plates of radius R each, separated by a distance d<<R. The capacitor is connected to a constant voltage. A thin conducting disc of radius r<<R and thickness t<<r is placed at a center of the bottom plate. Find the minimum voltage required to lift the disc if the mass of the disc is m.

A parallel plate capacitor is filled by a dielectric whose relative permittivity varies with the applied voltage (U) as ε = αU where α = 2V–1. A similar capacitor with no dielectric is charged to U0 = 78 V. It is then connected to the uncharged capacitor with the dielectric. Find the final voltage on the capacitors.

The battery remains connected to a parallel plate capacitor and a dielectric slab is inserted between the plates. What will be effect on its (i) potential difference, (ii) capacity, (iii) electric field, and (iv) energy stored?

A parallel-plate capacitor has plate area 20 cm2, plate separation 1.0 mm and a dielectric slab of dielectric constant 5.0 filling up the space between the plates. This capacitor is joined to a battery of emf 6.0 V through a 100 kΩ resistor. Find the energy for the capacitor 8.9 μs after the connections are made.

How many time constants will elapse before the energy stored in the capacitor reaches half of its equilibrium value in a charging RC circuit?

The plates of a capacitor of capacitance 10 μF, charged to 60 μC, are joined together by a wire of resistance 10Ω at t = 0. Find the charge on the capacitor in the circuit at

A capacitor of capacitance 10 μF is connected to a battery of emf 2V. It is found that it takes 50 ms for the charge on the capacitor to become 12.6 μC. Find the resistance of the circuit.