a. After complete oxidation of a glucose molecules, 38 number of ATP molecules are formed.

Explanation: We need energy to work through the day, similarly each cell of our body needs energy to survive. Cellular respiration is the process by which cell fulfill its energy need in the form of ATP. ATP is energy currency in the cell. In cellular respiration glucose molecules break down (oxidation) in presence of oxygen. On complete breakdown, each glucose releases 38 ATP molecules

b. At the end of glycolysis, 2 pyruvic acid, 2 ATP and 2 NAPH2 molecules are obtained.

Explanation: Glycolysis is the first step in cellular respiration. It takes place in the cytoplasm of a cell. In this process 1 molecule of glucose is converted into 2 molecules of pyruvic acid or pyruvate are obtained.

Explanation: In this phase of meiosis-I, there is exchange of a segment of chromosome between two non-sister chromatids of homologous chromosomes. This is called crossing over which leads to recombination. See diagram d. All chromosomes are arranged parallel to equatorial plane of cell in metaphase of mitosis.

Explanation: The chromosomes arranged themselves in the middle of the cell along an “imaginary line” called the metaphase plate with the help of the spindle fibers. 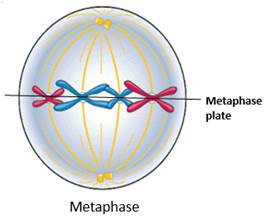 e. For formation of plasma membrane, lipids molecules are necessary.

Lipids are made of fatty acids and alcohol. Actually plasma membrane is living boundary of the cell is made of lipid + protein (lipoprotein).

When we do exercise, our body requires more energy, in such case our body cells under goes respiration without oxygen (anaerobic respiration) to fulfill its energy requirement.

How useful is this solution?We strive to provide quality solutions. Please rate us to serve you better.
NEXT<span lang="EN-US
Related Videos