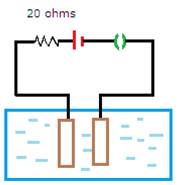 Using the formula, from faraday’s law of electrolysis –

m = the mass of the substance deposited on the electrode

I is the current in the circuit

Putting the above values in the formula, we get

A coil of resista

When a current pa

How did Douglas o