6. Refraction of Light at Curved Surfaces

Figure Q- 18 shows a point light source and its image produced by a lens with an optical axis N1N2. Find the position of the lens and is foci using a ray diagram. (AS5)

From the given points we can infer that the image formed will be magnified according to the heights of the dots. Moreover, the image should be erect. So now we have to select the lens. For concave lens only, diminished image will be formed of the object. Thus, we cannot take the concave lens and hence convex lens is the only option. In convex lens, there is only one position of the object where the image is erect & magnified that is the image should be between focus & O. This figure represents the opposite of the given figure. 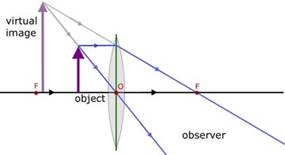 How useful is this solution?We strive to provide quality solutions. Please rate us to serve you better.
PREVIOUSFigure Q-17 shows ray AB that has passed through a divergent lens. Construct the path of the ray up to the lens if the position of its foci is known. (AS5)NEXTFind the focus by drawing a ray diagram using the position of source S and the image S’ given in the figure Q-I9. (AS5)
Related Videos

Can a virtual image be photographed by a camera? (AS2)

Find the focus by drawing a ray diagram using the position of source S and the image S’ given in the figure Q-I9. (AS5)

How do you verify experimentally that the focal length of a convex lens is increased when it is kept in water? (AS1)

A convex lens is made up of three different materials as shown in the figure Q-10. How many of images does it form? (AS2)

How do you appreciate the coincidence of experimental facts with the results obtained by a ray diagram in terms of the behavior of images formed by lenses? (AS6)

Draw a ray diagram for the following positions and explain the nature and position image.

Object is placed at C2

Figure Q-17 shows ray AB that has passed through a divergent lens. Construct the path of the ray up to the lens if the position of its foci is known. (AS5)

You have a lens suggest an experiment to find out the focal length of the lens. (AS3)

All In One Science 876 views
Q