Heterogamtic males are of two types: 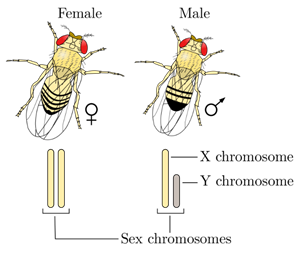 In some insects like grasshopper, bugs, etc…..females are homogametic i.e XX type but the male has only one sex chromosome, i.e “X” only.The male has chromosome numbers les that that of female.The female will produce only one type of eggs(XX) but male produces 50%sperm with ‘X’ and other 50% without ‘X’. The sex of offspring depends on the sperms that
fertilises the egg. 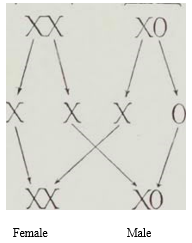 In most of the species like birds, moths and some fish a chromosomal mechanism of sex determination occurs that is basically identical to the XX-XY type.

The female possesses single Z chromosome in moth, butterflies and domestic chickens. Female produces 2 types of eggs one with ‘Z’ chromosome and other without ‘Z’ chromosome. While the male produces only one type of sperm carrying ‘Z’ only. The sex is determined on the basis of egg type being fertilised.