Therefore, a horse cannot pull a cart and run in empty space.

As a result, the passenger’s upper body is thrown forward while the lower body comes to halt with the bus.

C. When we pull a lawn mower, a force at some angle is applied on it. The vertical component is in the upward direction. This upward component reduces the effective weight of the mower, thus making it easier to pull.

Whereas, when we push a lawn mower, a force acting at some angle is applied on it, the vertical components is in the downward direction and act thus, increases the effective weight of the land mower. 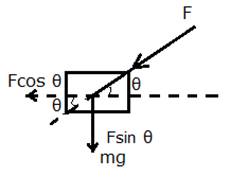 Due to the less effective weight in the first case, the land mower is easier to pull than push.

D. According to the second law of motion, we have the equation of motion as,

‘F’ is the force experienced by the cricketer as he catches the ball.

‘m’ is the mass of the ball

‘Δt’ is the short time of the impact with the hand of cricketer.

We can thus see from the equation that impact force is inversely proportional to the impact time, Thus, if the impact is for a shorter period of time then the force will be large.

It also shows that the force experienced by the cricketer decreases with the increase in the impact time.

State which of th