Explain what you understand by sexual reproduction.

The reproduction in which fusion of male and female gametes is involved, is called sexual reproduction. The cells involved in sexual reproduction are called gametes. Fertilization is the step of reproduction in which fusion of gametes take place to form zygote. After fertilisation, the zygote gradually divides to form an embryo within the ovule. The ovary of the flower develops and becomes a fruit with seeds inside it. The seeds develop from the ovules. The seed contains an embryo enclosed in a protective seed coat.

How useful is this solution?We strive to provide quality solutions. Please rate us to serve you better.
PREVIOUSDescribe the different methods of asexual reproduction. Give examples.NEXTState the main difference between asexual and sexual reproduction.
RELATED QUESTIONS :

Which of the following parts of a plant take part in sexual reproduction?

Choose the correct answer from below.

The reproductive part of a plant is the

Describe the various ways by which seeds are dispersed.

How does the process of fertilization take place in flowers?

Explain the difference between self-pollination and cross-pollination.

Sketch the reproductive part of a flower.

a. Production of new individuals from the vegetative part of a parent is called __________.

b. A flower may have either male or female reproductive parts. Such a flower is called ______.

c. The transfer of pollen grains from the anther to the stigma of the same or of another flower of the same kind is known as _______.

Which of the following parts of a plant take part in sexual reproduction?

Choose the correct answer from below. 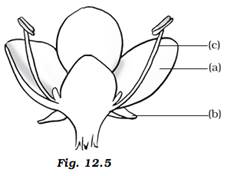