Exercise-1 Fill In the Blanks

Exercise-1 Get Together and do

Exercise-2 Fill In the Blanks


Class 9thTamilnadu Board Science4. Matter around us

Tyndall effect : It is the effect in which the light is scattered due to colloidal particles in its path as a result path of light becomes visible.

In the figure shown above, the first solution is plain water which does not exhibit Tyndall effect while the second one is a colloidal solution which shows Tyndall effect as the path inside it becomes visible due to scattering of the light by the colloidal particle.

Brownian Motion: Upon dropping some tiny particles in the fluid and observing it with a microscope, we see the zig-zag movement of the particles which occurs due to the collision with the particles of the fluid. This phenomenon is known as 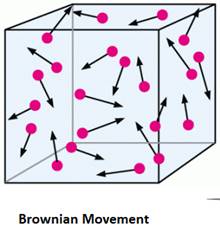 How useful is this solution?We strive to provide quality solutions. Please rate us to serve you better.
PREVIOUSWrite the differences between elements and compounds and give an example for each.NEXTHow are homogenous solutions different from heterogeneous solution? Explain with examples.
Related Videos