Working: SONAR is an acronym for Sound Navigation and Ranging. A beam of ultrasonic sound is produced and transmitted by the transducer (it is a device that produces ultrasonic sound) of the SONAR, which travels through sea water. The echo produced by the reflection of this ultrasonic sound is detected and recorded by the detector, which is converted into electrical signals. The distance (d) of the under-water object is calculated from the time (t) taken by the echo to return with speed (v) is given by 2d = v × t. This method of measuring distance is also known as ‘echo-ranging’. The figure below illustrates the working. 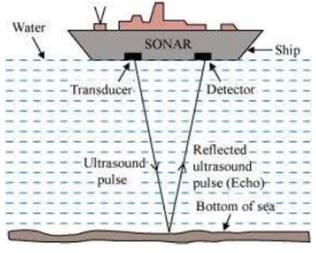 1. Used to measure the depth, direction, and speed of under-water objects such as submarines and ship wrecks.

2. It is also used in military for detecting the presence of enemy ships.

How useful is this solution?We strive to provide quality solutions. Please rate us to serve you better.
PREVIOUSHow do echoes in NEXTFind the period o
Related Videos

Rapid Fire Round on Sound40 mins

How do echoes in