Explain the structure of nerve cell through diagram. Explain the importance of hypothalamus and pituitary gland. 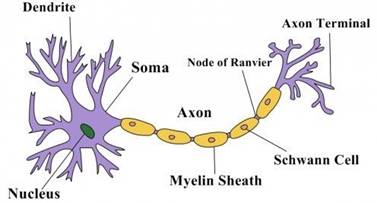 A nerve cell i.e., a neuron is the basic structural and functional unit of a nervous system. It is made up of dendrites that arise from the cell body or perikaryon and axon. The perikaryon contains a cell nucleus and perinuclear cytoplasm. It also has Nissl granules and some free ribosomes. The perikaryon has an axon hillock that gives rise to axon. Axon is a long cylindrical outgrowth which begins from cell body and ends up in branches. These branches have synaptic knobs at their ends which contain neurotransmitters. Neurotransmitters play an important role in nerve conduction.

Importance of hypothalamus- Hypothalamus found in the diencephalon part of the fore brain, controls metabolism, regulates the body temperature, regulates water balance, sleep etc. It is the center for hunger, thirst, sleep, temperature, fatigue etc. Hypothalamus links the nervous system to endocrine system via the pituitary gland. It sends signals to pituitary glands if any condition needs to be corrected. The hypothalamus itself acts as an endocrine organ by releasing the hormones ADH and oxytocin into circulation at neurohypophysis. It contains autonomic centers which have direct control over the adrenal gland.

How useful is this solution?We strive to provide quality solutions. Please rate us to serve you better.
PREVIOUSDraw the diagram of male reproductive system. State the mechanism of primary reproductive organs in human being.
Related Videos

What is the role of hypothalamus in endocrine system?

Explain the exocrine and endocrine function of pancreas.

Secretion of adrenaline hormone is done by which gland?

Write name of a hormone secreted by thyroid gland.

Which hormone is not secreted by pituitary gland?

Explain the structure of nerve cell through diagram. Explain the importance of hypothalamus and pituitary gland.

A pen stand made of wood is in the shape of a cuboid with four conical depressions to hold pens. The dimensions of the cuboid are 15 cm by 10 cm by3.5 cm. The radius of each of the depressions is 0.5cm and the depth is 1.4 cm. Find the volume of wood in the entire stand (see Fig. 13.16)

A container shaped like a right circular cylinder having diameter 12 cm and height 15 cm is full of ice cream. The ice cream is to be filled into cones of height 12 cm and diameter 6 cm, having a hemispherical shape on the top. Find the number of such cones which can be filled with ice cream.

A gulabjamun contains sugar syrup up to about30% of its volume. Find approximately how much syrup would be found in 45 gulabjamun each shaped like a cylinder with two hemispherical ends with length 5 cm and diameter 2.8 cm (see Fig. 13.15)

A farmer connects a pipe of internal diameter 20 cm from a canal into a cylindrical tank in her field, which is 10 m in diameter and 2 m deep. If water flows through the pipe at the rate of 3 km/h, in how much time will the tank be filled?

A vessel is in the form of an inverted cone. Its height is 8 cm and the radius of its top, which is open, is 5 cm. It is filled with water up to the brim. When lead shots, each of which is a sphere of radius 0.5 cm are dropped into the vessel, one-fourth of the water flows out. Find the number of lead shots dropped in the vessel.

A 20 m deep well with diameter 7 m is dug and the earth from digging is evenly spread out to form a platform 22 m by 14 m. Find the height of the platform.

Two poles of equal heights are standing opposite each other on either side of the road, which is 80 m wide. From a point between them on the road, the angles of elevation of the top of the poles are 60° and 30°, respectively. Find the height of the poles and the distances of the point from the poles