(a) Restriction Enzymes (RE):

RE was discovered by Werner Arber in 1963. These enzymes were isolated from bacteria (E.coli) where they were involved in the defence mechanism. RE serve as chemical knives/molecular scissors that cut DNA into distinct fragments. There are several RE known till date and each RE recognize a specific nucleotide sequence in DNA and cut at particular sites in DNA. After cutting the DNA into fragments, the desirable gene is incorporated into it.

And cuts between G and A (guanine and thymine). The action of RE produces overhanging stretches of DNA called sticky ends. The desirable gene is incorporated into the DNA and later joined by the enzyme DNA ligase. 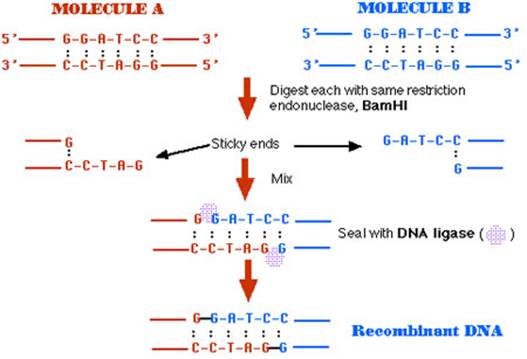 NOTE: RE are isolated only from prokaryotes because it is their natural defence mechanism against bacteriophage infection.

Plasmids are extra chromosomal, autonomous, circular, double-stranded, and self-replicating fragments of DNA present in bacteria and yeast. They are used as vectors in r-DNA technology. They are capable of replicating independently and do not contain any vital genes necessary for bacteria/yeast. They may be responsible for providing pathogenicity to bacteria and yeast. Plasmids may contain the genes for antibiotic resistance. They possess multiple restriction sites. The most commonly used plasmid is pBR322. 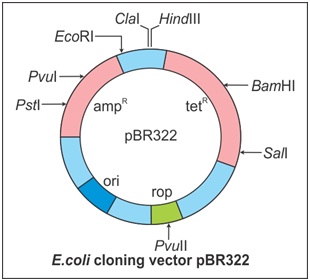 For example, EcoRI is used to cut pBR322. As a result, the plasmid becomes linear possessing sticky ends. Then the desirable gene is inserted into the plasmid and the joints are sealed using DNA ligase. This modified plasmid is then taken by the bacteria where it replicates and produces the desired product. 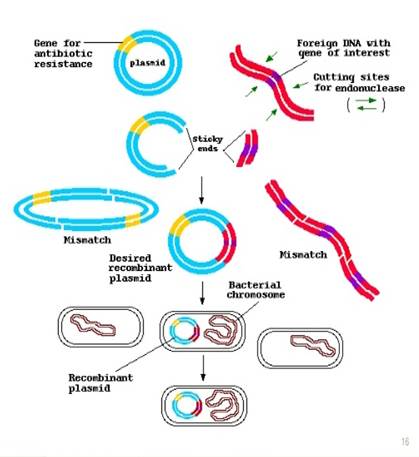