Explain the role played by haemoglobin in the transportation of oxygen and carbon dioxide.

I. Haemoglobin is an iron containing protein is present in the red blood cells (RBC).

II. It is a respiratory pigment that carries oxygen through red blood cells.

III. It transports about 97% of oxygen from lungs to the tissues and in returns it transports carbon dioxide from tissues to the lungs.

IV. Oxygen enters the body in the lungs, where it attaches to haemoglobin and carries blood to the body tissues.

V. In the tissues oxygen is removed from the blood, the blood cells are considered deoxygenated, and they flow back through the heart by veins.

VI. While passing through the body, blood picks up carbon dioxide as waste, which attaches to haemoglobin to form carboxyhaemoglobin.

VIII. At the end of the cycle, carbon dioxide passes through the lungs and out of the nose. 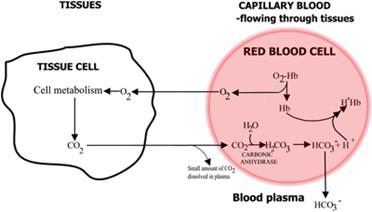 How useful is this solution?We strive to provide quality solutions. Please rate us to serve you better.
PREVIOUSObserve the two reactions given below.Reaction 1 C6H12O6 + 6O26CO2 + 6H2O + EnergyReaction 2 6CO2 + 6H2O C6H12O6 + 6O2a) Identify the process occurring in plants and in animals.b) Which is the process that takes place only in plants?NEXTSmoking is suicide and murder at the same time. Prepare a poster for the Health Club of your school based on the above statement.
Related Videos

How to be more productive?27 mins

Explain the role played by haemoglobin in the transportation of oxygen and carbon dioxide.

Reason for the diffusion of oxygen from alveoli to blood.