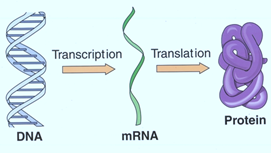 •The mRNA comes in the cytoplasm with coded message from DNA. 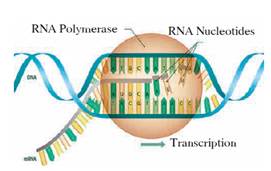 •The message contains codes for amino acids. The code for each amino acid consists 3 nucleotides called ‘triplet codons’. Each mRNA contains thousands of triplet codons. Amino acids are supplied by the tRNA (transfer RNA), per message on mRNA. For this, tRNA has anticodon having complementary sequence to the codon on mRNA. This is called translation. •The amino acid brought in by tRNA is bonded together by peptide bonds with the help of rRNA (ribosomal RNA).

•During this process ribosomes keep on moving from one end to other end of mRNA by the distance of one triplet codon. Such many chains come together to form a complex protein.