The main postulates of Bohr’s atomic model are:

● In atoms, electrons revolve around the nucleus in certain special or permissible orbits known as orbits or shells or energy levels.

● While revolving in these orbits the electrons do not radiate energy.

● K shell (n = 1) is closest to the nucleus and is associated with lowest energy. L, M, N, …. etc are the next higher energy levels. As the distance from the nucleus increases the energy of the shells also increases.

● The energy of each orbit or shell is a fixed quantity and the energy is quantized.

● As the distance from the nucleus increases, the size of the orbits also increases.

● Maximum number of electrons that can be accommodated in an energy level is given by 2n2 where n is the principal quantum number of the orbit. 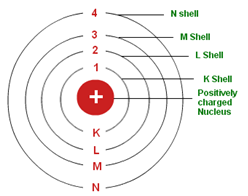 How useful is this solution?We strive to provide quality solutions. Please rate us to serve you better.
PREVIOUSWhat conclusions were made from the observations of Gold foil experiment?NEXTState the Gay Lussac’s law of combining volumes, explain with an illustration.
Related Videos

Together with Science 584 views
Q