8. Carbon and Its Compounds

Class 10thRajasthan Board Science8. Carbon and Its Compounds

Freons are Chlorofluorocarbons which are made up of chlorine, carbon, and fluorine. When carbon tetrachloride reacts with hydrogen fluoride in the presence of SbCl5 then Freon-11 is formed.

● The body stands for the group type

● The number stands for the molecular formula

● The suffix stands for different isomers

CFC-12b1 has no double bonds, only 1 carbon atom, no hydrogen atoms, 2 fluorine atoms, one chlorine atom replaced by bromine and no isomers = Bromochlorodifluoromethane

If it is a cyclic structure the number is prefixed with a "C" for cyclic. Sometimes some other bodies are found like FC (fluorocarbon), HC (Halocarbon) or R(refrigerant). 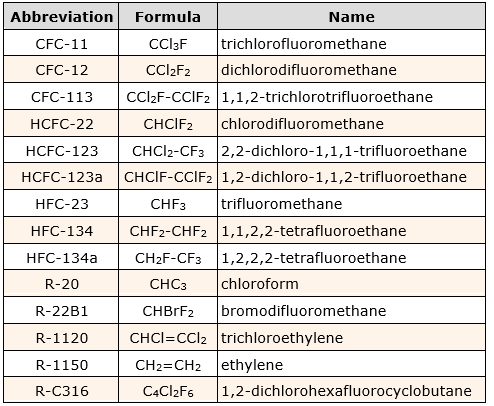 How useful is this solution?We strive to provide quality solutions. Please rate us to serve you better.
PREVIOUSWrite uses of diaNEXTWhat are syntheti
Related Videos