1. An aerosol is a colloid in which dispersed phase is a solid and dispersion medium is a gas. Atmospheric aerosols are solid and liquid particles suspended in air. Eg. Dust, smoke.

2. An emulsion is a special type of mixture made by combining two liquids that normally don't mix (immiscible). It is a colloid of two or more immiscible liquids where one liquid contains a dispersion of the other liquids. This process of turning a liquid mixture into an emulsion is called emulsification. Eg. Butter. 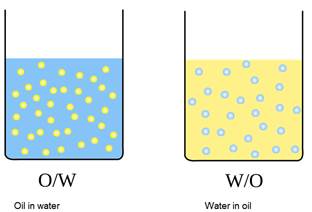 So, when soaps are mixed with water, above critical micelle concentration, it leads the formation of associated colloids.