7. Energy Flow in an Ecosystem

Explain the following cycles in your own words with suitable diagrams.

i. A major part of the carbon dioxide from the atmosphere enters into the living organisms through photosynthesis.

iii. These compounds are passed from green plants to the consumers (herbivores and carnivores).

iv. During respiration, plants and animals release carbon in the form of carbon dioxide back to the atmosphere.

v. The dead bodies of plants and animals as well as the body wastes, which are also rich in carbon compounds, are broken down by decomposers such as bacteria and fungi to release carbon dioxide.

vi. Carbon is also recycled during the burning of fossil fuels such as coal, petroleum products. i. Approximately 78% of air is nitrogen and it is a part of many molecules essential to life like proteins, nucleic acids (DNA and RNA), ATP, and some vitamins.

ii. Neither plants nor animals can use atmospheric nitrogen. Plants or animals use nitrogen when it is fixed by nitrogen-fixing bacteria present in the root nodules of pulses plants.

iv. Thus, nitrate is the usable form of nitrogen. Through the process of denitrification by denitrifying bacteria converts nitrates nitrogen gas which is released into the atmosphere. This complete the cycle. i. Oxygen from the atmosphere is used up in three processes. These are combustion, respiration and in the formation of oxides of nitrogen.

ii. Oxygen required for respiration in plants and animals enters the body directly from the surrounding medium (air and water).

iii. Oxygen is returned to the atmosphere by photosynthesis.

During photosynthesis oxygen is released in the form of molecular oxygen as a by-product. Thus, the cycle is completed. 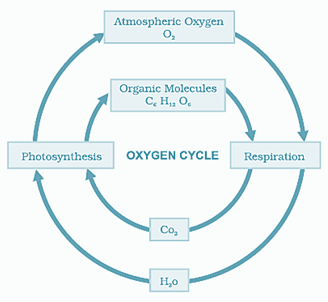 How useful is this solution?We strive to provide quality solutions. Please rate us to serve you better.
PREVIOUSGive reasons.A. Energy flow through an ecosystem is ‘one way’.B. Equilibrium is necessary in the various bio-geo-chemical cycles.C. Flow of nutrients through an ecosystem is cyclic.NEXTWhat would you do to help maintain the equilibrium in the various bio-geo- chemical cycles? Explain in brief.
Related Videos

NCERT | Energy and Its Type45 mins

State the different types of bio-geochemical cycles and explain the importance of those cycles.

What would you do to help maintain the equilibrium in the various bio-geo- chemical cycles? Explain in brief.

Explain the following cycles in your own words with suitable diagrams.

Prepare a model based on any natural cycle and present it in a science exhibition.

Write a paragraph on ‘Balance in an Ecosystem’.