(a) Movement along the same indifference curve.

a. All the points on an indifference curve represent all those combinations of two commodities which will provide the same level of satisfaction to the consumer.

b. This level of satisfaction will remain constant whether you move upward or downward on the same indifference curve.

c. The consumer will remain indifferent to these combinations because he does not have any preference among them.

e. This is because as the consumer consumes more and more of a commodity the marginal utility derived from that commodity continuous to fall.

f. This implies that the marginal rate of substitution decreases as we move down the indifference curve.

(b) The shift from a lower to a higher indifference curve.

b. The further we move away from the origin the level of satisfaction increases. 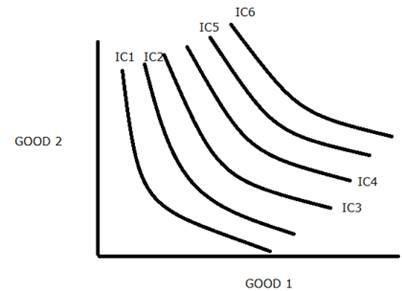 The law of equi marginal utility state that consumer is in equilibrium when he has attained maximum satisfaction out of his income and does not have any intention to make any change in its existing consumption.

This law is based on the following assumptions:

a. Rational behaviour of the consumer.

b. The consumer aims at maximizing his satisfaction from his income.

c. The utility should be measurable in terms of money.

d. The marginal utility of the money is constant.

The condition for this law are:

a. The ratio between marginal utility and price of one commodity must be equal to

the ratio between marginal utility and price of other commodities.

b. The total expenditure should be equal to the total income.

An explanation for this law:

a. Let us assume that there are only two commodities X and Y that a consumer want to purchase with his income.

b. According to Marshall, “If a person has a thing which can be put to several uses, 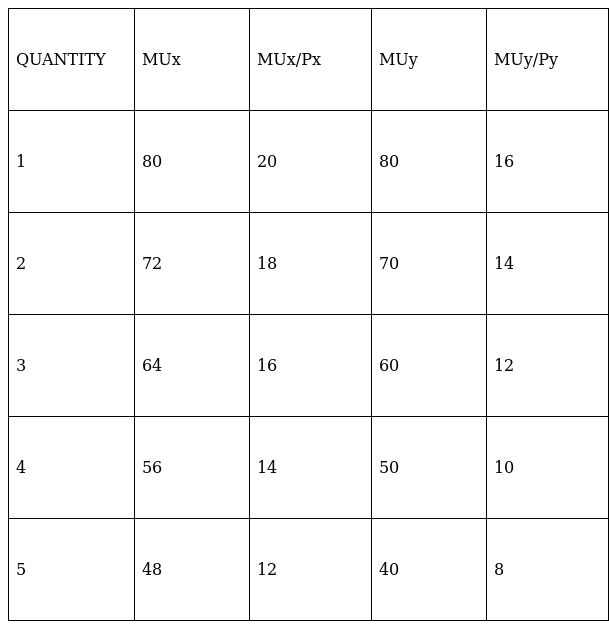 The following figure can be used to explain this law:

Let us assume that the price of the goods X and Y are Rs 4 and Rs 5 respectively. The income of the consumer is Rs 35.

Both the conditions are satisfied. The consumer good purchase 5 units of x commodity and three units of Y commodity. This would maximize his satisfaction from his Limited income.