(a) As HNO3 is an oxidising agent. So, when aluminium is dipped in HNO3 a layer of aluminium oxide is formed on the surface of the metal, which prevents it from further reactions with other compounds.

(b) Na, Mg metals are quite reactive and are present at the top of the reactivity series. Hence, their affinity towards oxygen is quite high and their oxides cannot be reduced by carbon.

(e) Metals like Na,K,Ca and Mg are quite reactive so, they cannot exist in free state and hence they are found in nature in form of their compounds

(a) The equations involved are written as:

(b) The process of electrolytic refining is explained as: 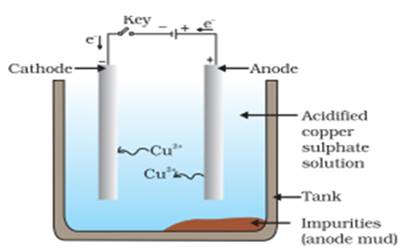 (a) Write the ste