13. Transportation, Circulation and Excretion in Organisms

Class 10thGujarat Board Science13. Transportation, Circulation and Excretion in Organisms

Excretory system of the human helps him/her in the process of Excretion. Excretion is an essential life process in which waste products formed during different biochemical reactions in our body are removed. Excretory system of a human being consists of following organs:

•Kidneys: A pair of bean shaped kidneys is present in the abdomen on the dorsal surface of body. The kidney remains divided into two portions – Cortex and Medulla.

They consist of the nephrons which are the excretory units.

•Ureters: A pair of ureters arises from each kidney. They carry the urine formed to the urinary bladder

•Urinary bladder: In this bladder urine is stored for some period of time.

•Urethra: This opens by a small opening which helps in excretion of urine from the body. 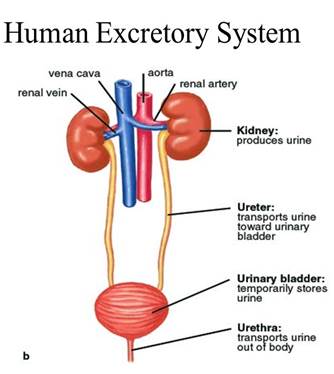 Now as told above that kidney comprises of excretory units known as nephron. Structure of nephron is explained below:

•Bowman’s capsule: This is a double walled cup in which filtrate of the blood comes. It comprises of a bunch of capillaries which helps in the ultrafiltration process.

•Proximal convoluted tubule: This is the narrow and coiled part of the tubule.

•Loop of Henle: This is a loop consisting of one thin limb known as ascending limb and one thick limb known as descending limb. In these tubular parts absorptions of necessary elements like water, certain ions and amino acids take place.

•Collecting duct: This is a duct in which various nephrons open and urine formed is collected into this duct and further is transferred to ureters.

Following is the structure of nephron: 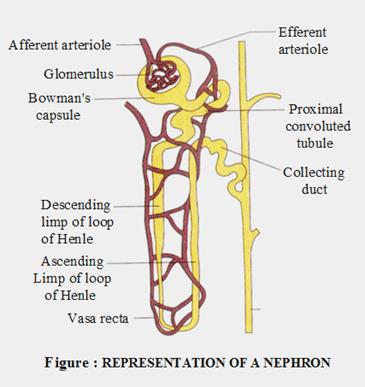 How useful is this solution?We strive to provide quality solutions. Please rate us to serve you better.
PREVIOUSDefine ExcrNEXTExplain the
Related Videos