The primary effluent is passed into a large aeration tank where its constantly agitated and mechanically and air is pumped into it. This allows the growth of useful microbes into flocs (masses of bacteria associated with fungal filaments to form mesh like structures ). A large part of organic matter in effluent will be consumed by these microbes; thereby reducing the BOD (biological oxygen demand – the amount of oxygen that would be consumed if all organic matter I 1 litre of water is oxidized by bacteria). The less the BOD of waste water, less is its polluting potential.

Once BOD of waste water is reduced significantly, the effluent is then passed into a settling tank where the bacterial flocs are allowed to sediment; this sediment is called activated sludge. A small part of activated sludge is pumped back to the aeration tank to serve as inoculums (initiator). The remaining major part of sludge is pumped into large anaerobic sludge digesters. Anaerobic bacteria grown digest the bacteria and fungi in the sludge. During this digestion, the bacteria produces a mixture of gases such as methane, hydrogen sulphide and carbon dioxide which form biogas and can be used as source of energy (as it is inflammable). 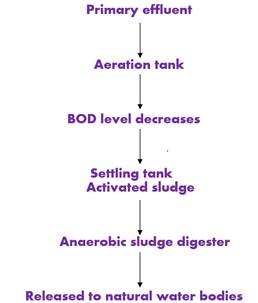 The demand for chemical fertilizers in agriculture has increased the pollution; this has thus urged us to switch on to organic farming-the use of bio fertilisers. Biofertilisers enrich the quality of nutrients in the soil.

• A fungus associated with roots of higher plants is a symbiotic relationship called mycorrhiza. The fungal symbiont absorbs phosphorus from soil and passes it to plants. Other benefits of this symbiotic association include resistance to root borne pathogens, tolerance to salinity and drought and an overall increase in plant growth and development.

• Cyanobacteria can fix atmospheric nitrogen. They are autotrophic in nature.

• Blue-green algae increase the fertility of soil by adding organic matter to it.

Presently the bio fertilisers are available commercially in market and farmers use them to replenish the soil with nutrients.