The producer’s equilibrium can be explained by the MC-MR equilibrium. The producer is in equilibrium in the short run when the production leads to the situation where the marginal revenue equals marginal costs.

The producer is in equilibrium when the profit is maximised under the MC-MR equilibrium. Profit rises when then MR exceeds MC. Losses are incurred when MC exceeds MR. Profits are maximised, and equilibrium is attained with the fulfilment of two conditions by the producer:

• The slope of MC is greater than the slope of MR i.e., MC curve cuts the MR curve from below. 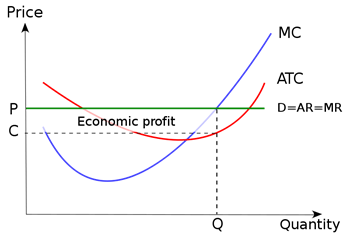 The ATC curve and the MC curves are U-shaped. This is due to the operation of the law of variable proportion. The D=AR=MR curve is the horizontal straight line MR curve. MR is a straight line under perfect competition as the MR will be equal to price when each unit is sold in the market.

Thus at equilibrium, both MC and MR will be equal. This will ensure the attainment of maximum profits.

If the market sup

How does an incre