A simplified model to explain the carbon cycle is as follows: 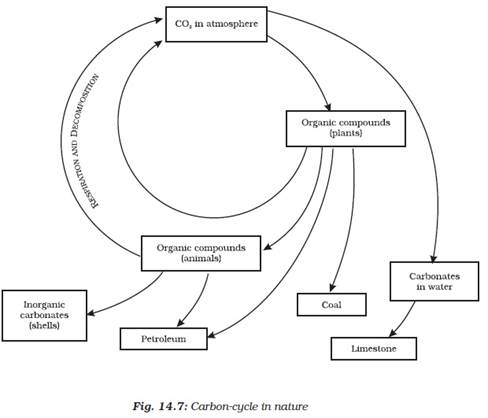 Carbon is found in various forms (elemental form as diamonds and graphite, combined state as carbon dioxide in the atmosphere, as carbonate and hydrogen carbonate salts in various minerals, as carbon-containing molecules like proteins, carbohydrates, fats, in life forms etc) on the Earth. Carbon is incorporated into different life forms by photosynthesis which is performed in the presence of Sunlight by all life-forms containing chlorophyll. This process converts carbon dioxide into glucose. These glucose molecules are either converted into other substances or used to provide energy for the synthesis of other biologically important molecules. The carbon dioxide from respiration goes back into the atmosphere. Another process that adds to the carbon dioxide in the atmosphere is the process of combustion.

(a) i) The species that invade a bare area are called pioneer species. In primary succession on rocks these species are usually lichens which are able to secrete acids to dissolve rock, helping in weathering and soil formation.

ii) These later give way to very small plants like bryophytes, which hold themselves in a small amount of soil.

iii) With time they are succeeded by bigger plants, and after several stages, ultimately a stable climax forest community is formed.

How did a citizen