Earlier insulin was extracted from pancreas of slaughtered cattle and pigs for diabetic patients. This sometimes resulted in allergy or other reactions as some patients were not able to accept the foreign protein.

So now using rDNA technology insulin is synthesized for humans.

Insulin consists of two short polypeptide chains: chain A and chain B. These two chains are linked together by disulphide bridges. 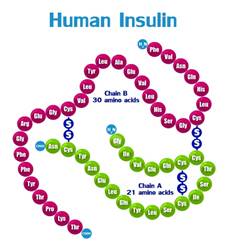 In mammals like human insulin is now synthesized as a pro- hormone. Pro-hormone (like pro-enzyme) needs to be processed before it is fully mature and functional. This pro-hormone has an extra stretch called C- peptide. T

During processing of pro-hormone for making it mature, this C-peptide is removed, so mature insulin lacks C-peptide.

Eli-Lily an American company, in 1983 prepared two DNA sequences equivalent to chain A and chain B of human insulin, and then introduced these in plasmids of E.coli to produce insulin chains.

The chain A and chain B were formed separately. Then these chains were extracted and combined with the help of creating disulphide bonds.

rDNA technology had problem while getting insulin assembled into a mature form.

PCR (Polymerase Chain Reaction) is a technique used in the lab to make millions of copies of a particular section of DNA or gene.

In PCR multiple copies of gene (or DNA) of interest is synthesised in vitro using two sets of primers and the enzyme DNA polymerase.

Using the nucleotides the enzyme extends the primers provided in the reaction and the genomic DNA as template.

If the process of replication of DNA is repeated many times lead to amplification of the segment of DNA, this is achieved by the use of a thermostable DNA polymerase.

The thermostable DNA polymerase is isolated from a bacterium, Thermus aquaticus. It remains active during the high temperature induced denaturation of double stranded DNA.

The amplified fragment can be used to ligate with a vector for further cloning if required. 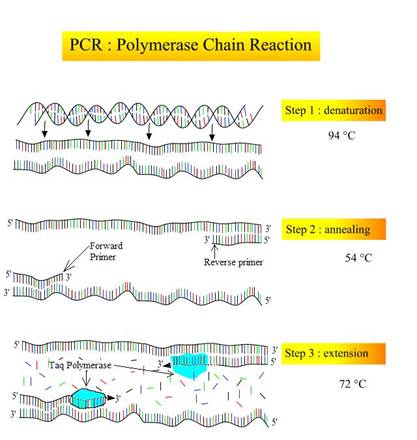 The materials needed to carry out amplification of gene of interest using Polymerase Chain Reaction (in vitro) are as follows:

- DNA template or gene to be copied.

- Primers: they are small chemically synthesised oligonucleotides that are complementary to the regions of DNA. Primers initiate the PCR reaction.

- DNA nucleotide bases: also known as dNTPs. DNA bases (A, C, G and T) are the building blocks of DNA and are needed to construct the new strand of DNA.

- Buffer: it is to ensure the right conditions for the reaction

(b) The purpose of such an amplified DNA sequence is as follows:

- It is used in detection of HIV in AIDS patient

- It is used to detect mutation in genes in suspected cancer patients.