Rutherford’s gold foil experiment led to the discovery of nucleus. The experiment setup can be illustrated as: 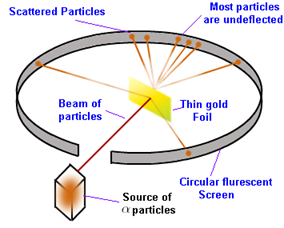 α (alpha) particles (helium nucleus cation) of very high energy were bombarded on gold foils of thickness of 100 nm. A circular screen surrounded the thin gold foil, and is coated with a fluorescent material from inside (ZnS). The beam of energetic alpha particles hit the thin gold foil and the scattered beams hit the screen producing a flash on it. This would help in knowing the path of the scattered alpha rays.

● Most of the alpha rays passed through the gold foil without any deflection.

● A very few alpha particles (say 1 in 20,000 particles) bounced back and returned to its own path. This means that the scattering angle is roughly 180°.

Based on the above observations, Rutherford concluded that,

● Most part of the atom is hollow and chargeless as there were no deflections of alpha rays in most of the cases.

● There exists a region at the centre of the atom where the positive charge is concentrated. The alpha rays which approached near to it were scattered at small angles. The rays which directly hit this region bounced back and retraced the path. This region was later named as nucleus.

● The volume of positive charge region in atom is very less than that of the atom.

Which type of rad