Explain in brief, what happens when two force act in opposite direction on an object. 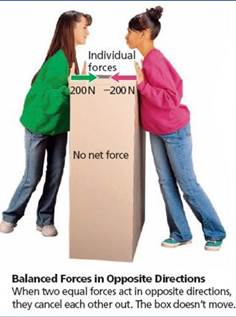 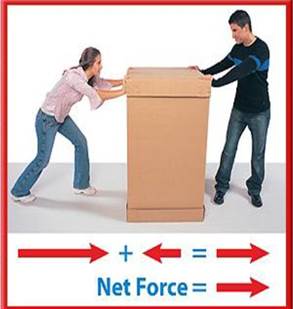 How useful is this solution?We strive to provide quality solutions. Please rate us to serve you better.
PREVIOUSMention the necessary conditions for a force to come into play.NEXTIn brief manner, explain the change in the state of motion.
Related Videos

Learn About Force & Its Types36 mins

Champ Quiz | Can you Identify the Force?32 mins

Give one example where force changes the speed of a moving object.

Why does the shape of an ointment tube change when we squeeze it ?

Give one example where force changes the direction of a moving object.

In a tug of war; when the two teams are pulling the rope, a stage comes when the ropedoesnot move to either side at all. What can you say about the magnitudes and directions of the forces being applied to the rope by the two teams at this stage?

Two persons are applying forces on two opposite sides of a moving cart. The cart still moves with the same speed in the same direction. What do you infer about the magnitudes and direction of the forces applied?

If two pushing force acting on a body in opposite direction, then what will be the net force on an object.

What happens to the springs of a sofa when we sit on it ?

Explain in brief, what happens when two force act in opposite direction on an object.

During dry weather, clothes made of synthetic fiber often stick to the skin. Which type of force is responsible for this phenomenon?

Draw a labelled diagram of larynx and explain its functions.

Write the additive inverse of each of the following.

Sets of reproductive terms are given below. Choose the set that

has an incorrect combination.