• Darwinian Selection Theory states that “The organisms with the characteristics that enable them to survive better in natural conditions (the existing environmental conditions) would outbreed others that are less-endowed to survive under those conditions.”

• Bacteria have been subjected to antibiotics since the earliest discovery of the first antibiotic i.e. Penicillin. Due to these constant treatments, certain strains of bacteria, due to mutations, developed resistance, or the already present resistance gene, now got selected as they could still survive in the presence of the antibiotics.

• Only the ones that survived the antibiotic treatment could further perpetuate and produce offsprings, resulting in the increase of antibiotic resistance in the bacterial population.

• Hence, the antibiotic resistance was observed in bacteria.

How useful is this solution?We strive to provide quality solutions. Please rate us to serve you better.
NEXTFind out from newspapers and popular science articles any new fossil discoveries or controversies about evolution.
Related Videos

Appearance of antibiotic-resistant bacteria is an example of:

Viviparity is considered to be more evolved because:

When we say "survival of the fittest", does it mean that a. those which are fit only survive, or b. those that survive are called fit? Comment.

Among Ramapithecus, Australopithecines and Homo habilis - who probably did not eat meat?

What is founder effect?

In a certain population, the frequency of three genotypes is as follows: 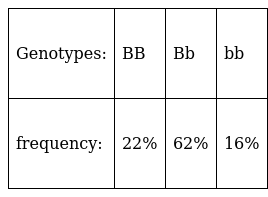 What is the likely frequency of B and b alleles?