Examine the pie charts showing land use in figure 6.1 and answer the following questions: 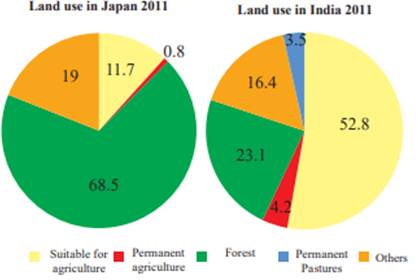 a. In which country is the land under forests more?

b. In which country is the land under agriculture more?

c. Considering the two questions above, how will you relate the physiography and climate of India and Japan with their respective land uses?

a. The land under forests is more in Japan as compared to India according to the land use data of 2011. Japan has 68.5% of its area under forests, while in India it is just 23.1%.

c. The land use in different countries differs according to their circumstances, situations and needs of the people. Japan has more forest cover, while India has more agricultural land. While comparing the total land area, India is nearly 8 times larger than Japan. Most of the land area in India is also suitable for cultivation. With the growing population in India, the demand for an increase in the area under cultivation is rising. Thus more land has to be brought under cultivation in the case of India. Also, India is well-endowed with the natural resources and the climate that gives the country an edge in increasing its agricultural productivity. But Japan with limited land availability and negligible resources lacks the potential to increase its agricultural productivity. Still, the island country has achieved development in many other fields.

How useful is this solution?We strive to provide quality solutions. Please rate us to serve you better.
PREVIOUSCan you tell which area the property is located?NEXTGive the answers on the basis of figure 6.4a. Which are the land uses of 1990-91 that show a decline in 2010-11? What could be reasons for this?b. Which type of land use is maximum? What would be the impact of this on India’s environment?c. Can a decline in the area under agriculture be equated with a food shortage?
Related Videos

How to Use Algebraic Identities40 mins

Reasons Behind the Rise in Use of Synthetic Fibres!30 mins

The figure shows the satellite images of Mondha Village, Nagpur. Find out the changes in land use pattern and write a note. In urban areas, the largest area is used for residential purposes.

Clarify the differences between rural and urban land uses.

Extract 12 indicates a change in ownership.

Differentiate between 7/12 extract and property card.

State the factors affecting land use.

Landuse for the public facility are extremely important in urban areas.

Why is agriculture important in rural land use?

The cost of furniture inclusive of VAT is Rs. 7150. If the rate of VAT is 10%, find the original cost of the furniture.

Fill in the blanks to make the statements true.

The standard form of

A VCR and TV were bought for Rs 8,000 each. The shopkeeper made a loss of 4% on the VCR and a profit of 8% on the TV. Find the gain or loss percent on the whole transaction.

During a sale, a shop offered a discount of 10% on the marked prices of all the items. What would a customer have to pay for a pair of jeans marked at Rs 1450 and two shirts marked at Rs 850 each?