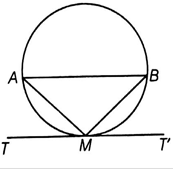 Let us draw a circle in which AMB is an arc and M is the mid-point of the arc AMB. Joined AM and MB. Also TT' is a tangent at point M on the circle.

As M is the mid point of Arc AMB

So, AB || TT' [two lines are parallel if the interior alternate angles are equal]