0 is the point of

ABCD is a trapezium,


Diagonals AC and BD are intersect at 0.

AAA Similarity Criterion: If all three angles of a triangle equals to angles of another triangle, then both the triangles are similar.

Basic Proportionality theorem: If a line is parallel to a side of a triangle which intersects the other sides into two distinct points, then the line divides those sides in proportion 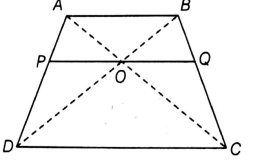 Sides AB and BC a