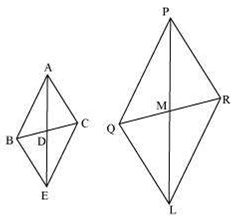 We know that medians divide opposite sides.

And, PM = ML (By construction)

Diagonals AE and BC bisect each other at point D.

Quadrilateral ABEC is a parallelogram.

Similarly, we can prove that quadrilateral PQLR is a parallelogram and PR = QL, PQ = LR

It was given in the question that,

We know that corresponding angles of similar triangles are equal.

Similarly, it can be proved that

Adding equation (i) and (ii), we obtain