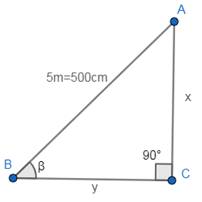 Let the length of the ladder = 5m=500cm be the hypotenuse of the right triangle so formed as shown in the above figure.

Now let β be the angle between the ladder and the floor, so from the figure we can write that

Now differentiating both sides with respect to time t, we get

Applying the derivatives, we get

But given the top of the ladder slides downwards at the rate of 10 cm/sec, i.e.,

So the above equation becomes,

So the correct option is option B.

The side of an eq

For the curve, <s

The money to be s

The side of an eq

The volume of a s