If one of the angles of a triangle is 110°, then the angle between the bisectors of the other two angles is
A. 70°

As by the angle sum property

If the bisector of both angles are made…

Then both angled get halved

∴ it forms a new triangle if the bisectors are joined

∴ the 3rd angle will be

How useful is this solution?We strive to provide quality solutions. Please rate us to serve you better.
PREVIOUSIf the exterior angle of a triangle is 130° and its interior opposite angles are equal, then measure of each interior opposite angle isNEXTIn ∆ABC, AD is the bisector of ∠A meeting BC at D, CF ⊥ AB and E is the mid-point of AC. Then median of the triangle is
RELATED QUESTIONS :

In a right-angled triangle, the angles other than the right angle are 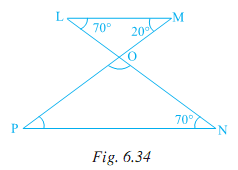 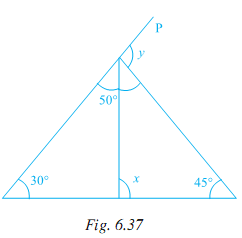 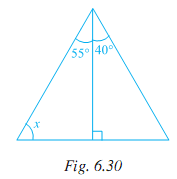 The measure of three angles of a triangle are in the ratio 5 : 3 : 1. Find the measures of these angles.

In Fig. 9.44 a rectangle with perimeter 264 cm is divided into five congruent rectangles. Find the perimeter of one of the rectangles.