Given: ∆ABC is equilateral triangle.

Let our triangle be ∆ABC, which is equilateral triangle as shown in the figure. 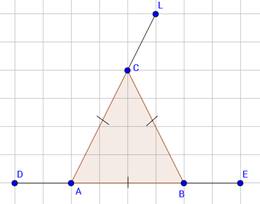 Hence all angles are equal and measure 60° each.

Also here, ∠CAD and ∠CBE are exterior angles of the triangle.

So, we know that,

From (1) and above statements, we state that,

Hence, the measure of each exterior angle of an equilateral triangle is 120°

My friend has bou

Talk to some old