Given: ∆ABC is isosceles triangle.

Let ∆ABC be our isosceles triangle as shown in the figure. 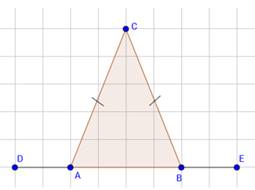 We know that base angles of the isosceles triangle are equal.

Also here, ∠CAD and ∠CBE are exterior angles of the triangle.

So, we know that,

So from (1) and above statement, we conclude that,

∴For the isosceles triangle, the exterior angles so formed are equal to each other.

What are the reas