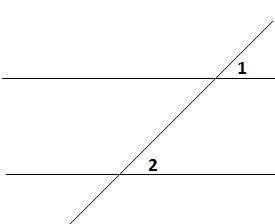 From the figure if angles 1 and 2 are equal then the lines when extended to infinity will not intersect and hence will be parallel.

How useful is this solution?We strive to provide quality solutions. Please rate us to serve you better.
PREVIOUSHow would you rewrite Euclid’s fifth postulate so that it would be easier to understand?
Related Videos

Attempts to prove Euclid’s fifth postulate using the other postulates and axioms led to the discovery of several other geometries.

“For every line l and for every point P not lying on a given line l, there exists a unique line m passing through P and parallel to l” is known as Playfair’s axiom.

How would you rewrite Euclid’s fifth postulate so that it would be easier to understand?