Thirty students were interviewed to find out what they want to be in future. Their responses are listed as below:

Arrange the data in a table using tally marks.

Tally marks means hash marks. They are in the form of numerals used for counting.

And 5 is written as

Numbers of students having future profession as Engineer =6

Numbers of students having future profession as officer =6

Numbers of students having future profession as pilot =8

Arranging them in the form of table using tally marks 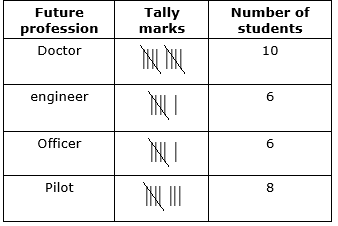 Following is the choice of sweets of 30 students of Class VI :

(b) Which sweet is preferred by most of the students?

Catherine threw a die 40 times and noted the number appearing each time as shown below:

Make a table and enter the data using tally marks

Find the number that appeared

(a) The minimum number of times

(b) The maximum number of times

(c) Find those numbers that appear an equal number of times

In a Mathematics test, the following marks were obtained by 40 students. Arrange these marks in a table using tally marks.

(a) Find how many students obtained marks equal to or more than 7?

(b) How many students obtained marks below 4?

An observation occurring five times in a data is recorded as

A _______ is a collection of numbers gathered to give some meaningful information.

An observation occurring seven times in a data is represented as________ using tally marks.

Thirty students were interviewed to find out what they want to be in future. Their responses are listed as below:

Arrange the data in a table using tally marks.

Fill in the blanks in the following table which represents shirt size of 40 students of a school.

Following are the choices of games of 40 students of Class VI:

a) Arrange the choices of games in a table using tally marks.

b) Which game is liked by most of the students?

c) Which game is liked by minimum number of students?

Using the following words, write the habitat of each animal given in Fig. 9.1 (a to d). Translate each of the following statements into an equation, using x as the variable:

(b) One fifth of a number is 5 less than that number.

(e) 1 subtracted from one-third of a number gives 1.

(a) Ujjain was the gateway to the north-west.

(b) Chandragupta’s ideas were written down in the Arthashastra.

(c) Kalinga was the ancient name of Bengal.

(d) Most Ashokan inscriptions are in the Brahmi script.

The words given against the sentences below can be used both as nouns and verbs. Use them appropriately to fill in the blanks.

Imagine you are journeying through a desert. Write a couple of paragraphs describing what you see and hear.