The figure is shown below: 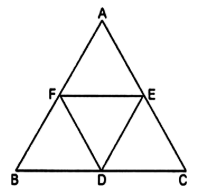 We know that the midpoint theorem states that the line joining the mid-points of any two sides of a triangle is parallel to the third side and equal to half of it.

Since D, E and F are respectively the midpoints of sides AB, BC and CA of ΔABC,

We know that if in two triangles, sides of one triangle are proportional to (i.e., in the same ratio of) the sides of the other triangle, then their corresponding angles are equal and hence the two triangles are similar (SSS criteria).

But we need to find the ratio of the areas of ΔDEF and ΔABC.

The areas of two

The areas of two

If the altitude o

If the areas of t