When you draw 3 cards out of 52 successively, then total no of ways of drawing is not simply 52C3, once you have drawn the first card, only 51 cards are remaining and so on. You are drawing only one card at a time.

Note: In our problem, it is given that after every draw, we are not replacing the card. So our sample space will change in this case

In a deck of 52 cards, there are 4 aces each of one suit respectively.

Let X be the random variable denoting the number of aces for an event when 2 cards are drawn successively.

{we might get ace in the first card or in the second card, so both probabilities are added} 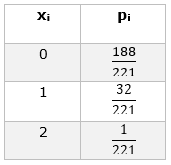 Assume that the c

A die is tossed t

Find the angle be

A battery of emf

Suppose we have f