A factory owner purchases two types of machines, A and B, for his factory. The requirements and limitations for the machines are as follows : 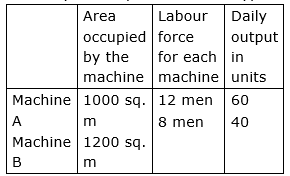 He has an area of 7600 sq.m available and 72 skilled men who can operate the machines. How many machines of each type should he buy to maximize the daily output?

Let required number of machine A and B are x and y respectively.

But total men available for work are 72.

Hence mathematical formulation of the given LPP is,

0 [Since number of machines can not be less than zero] 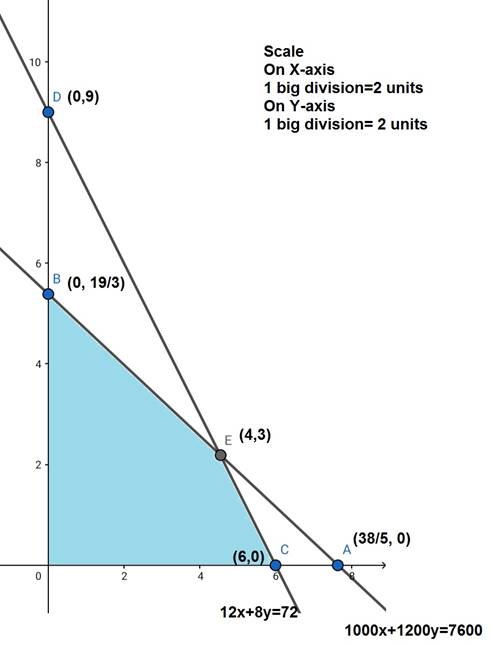 Thus the values of Z at these corner points are as follows:

How useful is this solution?We strive to provide quality solutions. Please rate us to serve you better.
PREVIOUSA manufacturer makes two types A and B of tea - cups. Three machines are needed for the manufacture and the time in minutes required for each cup on the machines is given below :Each machine is available for a maximum of 6 hours per day. If the profit on each cup A is 75 paise and that on each cup B is 50 paise, show that 15 tea - cups of type A and 30 of type B should be manufactured in a day to get the maximum profit.NEXTA company produces two types of goods, A and B, that require gold and silver. Each unit of type A requires 3 gm of silver and 1 gm of gold while that of type B requires 1 gm of silver and 2 gm of gold. The company can produce 9 gm of silver and 8 gm of gold. If each unit of type A brings a profit of ₹ 40 and that of type B ₹ 50, find the number of units of each type that the company should produce to maximize the profit. What is the maximum profit?
Related Videos