Show that the lin

Let ABCD be a quadrilateral. E, F, G and H are the midpoints of sides AB, BC, CD and DA respectively.

Let the position vectors of these vertices and midpoints be as shown in the figure. 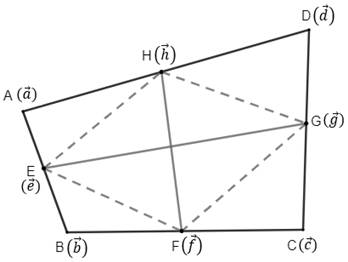 As E is the midpoint of AB, using midpoint formula, we have

Two vectors are equal only when both their magnitudes and directions are equal.

This means that the opposite sides in quadrilateral EFGH are parallel and equal, making EFGH a parallelogram.

EG and HF are diagonals of parallelogram EFGH. So, EG and HF bisect each other.

Thus, the line segments joining the midpoints of opposite sides of a quadrilateral bisect each other.

A and B are

L and M are two p