Show that the fou

Given the position vectors of points P, Q, R and S are

We now divide the equation with 11 on both sides.

Now, consider the LHS of this equation.

, the position vector of some point X. 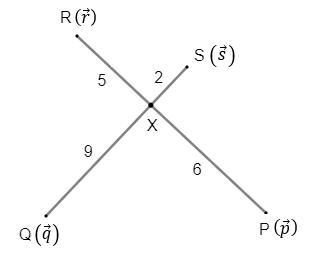 respectively, internally in the ratio m : n is

So, X divides RP internally in the ratio 5:6.

Similarly, considering the RHS of this equation, we have the same point X dividing SQ in the ratio 2:9.

So, the point X lies on both the line segments PR and QS making it the point of intersection of PR and QS.

As PR and QS are two straight lines having a common point, we have all the points P, Q, R and S lying in the same plane.

Thus, the points P, Q, R and S are coplanar and in addition, the position vector of the point of intersection of line segments PR and QS is

How useful is this solution?We strive to provide quality solutions. Please rate us to serve you better.
PREVIOUSShow that the fouNEXTThe vertices A, B
Try our Mini CourseMaster Important Topics in 7 DaysLearn from IITians, NITians, Doctors & Academic Experts
Dedicated counsellor for each student
24X7 Doubt Resolution
Daily Report Card
Detailed Performance Evaluation
view all courses

A and B are

L and M are two p