Evaluate the area bounded by the ellipse

Given the boundaries of the area to be found are,

From the equation, of the ellipse 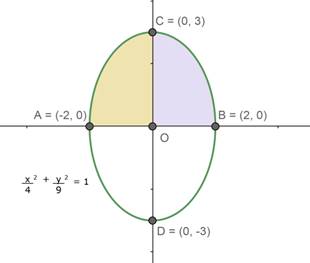 As x and y have even powers, the area of the ellipse will be symmetrical about the x-axis and y-axis.

, can be re-written as

As given, the boundaries of the re to be found will be

Now, the area to be found will be the area under the ellipse which is above the x-axis.

Area of the required region = Area of ABC.

The Area of the required region 3π sq. units

Find the area of the region included between the parabola y2 = x and the line
x + y = 2.

Draw the structures of major monohalo products in each of the following reactions:

1. Getting enough sleep is as important as taking time out to relax. A good night’s sleep is essential for preserving the health of your brain and gives you the best chance to meet the coming day with a razor-sharp mind. An average person needs about six to eight hour sleep a night – although it is also true that you need slightly less than this, as you grow older-another advantage of ageing stress and sleep deprivation often feed on each other, since stress tends to make it harder for you to fall asleep at night and sleep deprivation in itself causes stress.

2. Eventually, too little sleep can dramatically interfere with the performance of your memory – something you obviously want to prevent. If you are not getting enough sleep, try going to bed 30 to 60 minutes earlier than your normal bedtime for a few days. Lie down on the bed and try to relax by dissociating yourself from your daily routine work. This is normally enough to catch up on any sleep deprivation.

3. If, however, you suffer from insomnia you should seek the advice of your doctor. The chances are it is already affecting your ability to remember and recall information – and if you are struggling to improve your memory scores, this could be at the root of your problem. Prolonged periods of insufficient sleep can deplete your immune system, make you more accident prone and even cause depression – this can also reinforce a more negative outlook on life, which can contribute to your stress burden. The good news is that your memory and mood should automatically improve once you improve your sleep patterns. Tackle your sleep issues and everything else should fall into place.

4. Because stress management is so essential to maximize your brain power, if you are not in the habit of setting aside time to relax, make it a priority to do so. Even a minute or two of deep breathing can start to work wonders. Often the best ideas and memories can come to you when you are in a state of relaxation as it is during these moments that your brain stores, processes and plays with the information it has received.

5. Meditation has long been part of religious and spiritual life, especially in Asia. Today, more and more people are adopting it in Western countries also, for its value in developing peace of mind and lowering stress. There is some evidence that regular meditation can have real sleep gain and health benefits particularly in terms of protecting your brain against ageing.

2.1. On the basis of your understanding of the above passage, make notes on it using headings and subheadings. Use recognizable abbreviations (wherever necessary – minimum four) and a format you consider suitable. Also supply an appropriate title to it.

2.2 Write a summary of the above passage in about 100 words.