A ladder of lengt 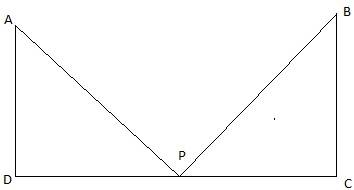 In the above figure, AD and BC are the two opposite walls of the same room. The ladder is fixed at the position say P on the floor. Join D,P and C. At first let it leans against the wall BC making an angle of 45° with the floor. Join B and P. We get a right-angled triangle BPC with right angle at C and ∠BPC = 45°. Again, when the ladder leans against the second wall AD, it makes an angle of 60° with the floor. Joining A and P, we get a right-angled triangle APD with right angle at D and ∠APD = 60°. We are to find the distance between the two walls, that is DC. Also given that, AP = PB = length of the ladder = 6 m.

To find DC, we separately find DP and PC from triangles APD and BPC respectively by using the trigonometric ratio cosine.

How useful is this solution?We strive to provide quality solutions. Please rate us to serve you better.
PREVIOUSThe angles of eleNEXTFrom the top of a
Try our Mini CourseMaster Important Topics in 7 DaysLearn from IITians, NITians, Doctors & Academic Experts
Dedicated counsellor for each student
24X7 Doubt Resolution
Daily Report Card
Detailed Performance Evaluation
view all courses